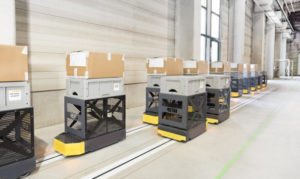 Do you also think of a self-steering aircraft or even “The Terminator” when you hear about an autonomous drone or robot?

Although big steps are being taken in that direction, you will probably soon encounter a much less sexy robot: the AGV. An Automatic Guided Vehicle is already being used in the industry every day to transport tools or materials. This gives the professionals the time and space to concentrate on their work.

Developments in this area are going fast, for example: Vanderlande from Veghel (the Netherlands) developed an AGV application to handle baggage handling at airports. Airport Lelystad is the first airport where these AGV’s will be used. An impression of how that looks in practice:

An automatically guided vehicle (AGV) is a mobile robot that uses markers, wires, magnets, laser or other instruments for navigation. AGVs are often used in industrial applications to transport materials in a factory or warehouses. Since the late 20th century, AGVs have gained increasing importance in the logistics sector. 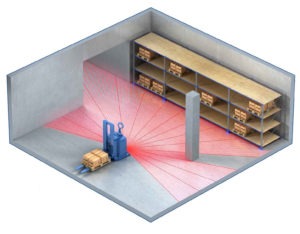 How does an AGV navigate?

Automated Guided Vehicles (AGV’s) are also known by other names, including LGV (Laser Guided Vehicle), SGV (Self Guided Vehicle), as well as guided carts, mobile robots, self-steering vehicles or autonomous vehicles and similar name variations. Names can be different, but every device has a (sometimes multiple) method of automatic navigation based on one of these following technologies:

Smaller AGV’s usually have 3 wheels (in this case, then it is always stable, regardless of the surface), 2 which are parallel to each other and 1 support wheel. When the driven wheels rotate at the same speed, the AGV goes straight ahead or backwards. For example, if the left wheel rotates slower as the right wheel, the AGV makes a left turn according to the same principle as a tank turns. Larger and heavier AGV’s have different steering mechanisms and often several steering wheels or wheel sets. 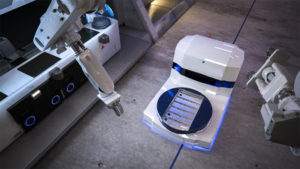 The future of AGV

The developments in the AGV world are going very fast: radar and sonar controls that register obstacles, higher payloads, higher speeds and of course the enormous developments in the area of the batteries. The applications also expand enormously: from the traditional supply of components for the automotive sector and order picking in warehouses, luggage handling at airports, amusement parks, hospitals and feeding robots in the agriculture.

High requirements of a AGV gearbox

For each of these applications the requirements are different: sometimes the AGV’s have to be in operation 24/7, or in other applications the AGV has to navigate very carefully through an area where people walk. In agriculture applications it can happen the AGV literally has to navigate through excrement or manure and a 1,000 kg cow can sit down spontaneously on the device. The requirements of the gearboxes used are therefore different per case, but always high. Due to the oversized bearings on the output side and sophisticated seals, certain series gearboxes from Apex Dynamics are very well suited for these heavy applications.

The gearbox has an important role in an efficient drive 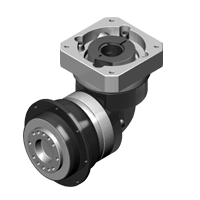 However, a common denominator is the same for all AGVs: their performance is limited by the existing battery pack. It is therefore of great importance to convert the electrical energy as efficiently as possible into kinetic energy. Especially for this purpose, Apex Dynamics has developed a series of low-backlash gearboxes with a high efficiency. The most suitable gearboxes for AGV applications have the following characteristics:

Contact one of the specialists of Apex Dynamics for more information