Home » Newsarchive » Robotic welding line automation thanks to the interplay of gearboxes, pinions and racks

Robotic welding line automation thanks to the interplay of gearboxes, pinions and racks 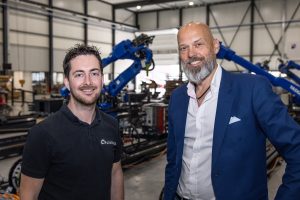 Construction of greenhouses in the horticultural sector consist of a large number of steel elements that are partly welded together. Maurice Kassenbouw from the Netherlands has been using Yaskawa welding robots for the welding processes for twenty years. When these were due for replacement, the company expressed its wish to automate production as much as possible. In response to this demand, an entirely new production line has been developed where ten (10) handling and welding robots move on tracks via pinions over racks from Apex Dynamics. This accurate, automated solution has drastically reduced the number of people required for the production process. 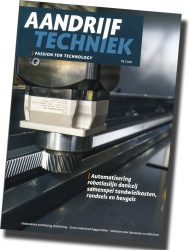 Greenhouse constructions for horticulture are constructed by combining a large number of steel elements with glass or plastic sheets. The beams and bars are connected to each other in such a way that a lightweight but strong construction is created that is fully tailored to the requirements of the horticulturist. In terms of size, durability, ventilation options, sun protection and so on. 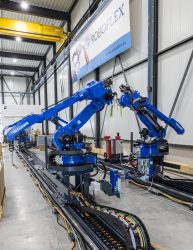 At greenhouse construction company Maurice Kassenbouw, a large part of these connections between the steel parts are realized by means of welding. The company has been using welding robots for this process for years. Just before the Covid-19 outbreak, the company indicated that the now twenty-year-old Yaskawa robots needed to be replaced. For this, the company came to Roboflex; a company also from the Netherlands that has been engaged in production welding for third parties since 1999 under the name Produlas. Later, the sale of Yaskawa robots was added.

Tommy Hofkens is operational manager and co-owner and says: “The sales of robot installations to supplement our own welding went very well. After all, welding robots are indispensable for welding automation. They offer higher efficiency, lower labor costs and also contribute to a high and constant quality. In addition, the associated software is also being further improved, so that robots can be used for increasingly complex welding processes. This also makes them increasingly profitable for smaller series. In addition, based on our own experience, we were able to provide the right expertise when purchasing robots. After all, a welding process is complex and the quality depends on sophisticated various variables. The right robot and especially the right programming and fixture are therefore of crucial importance.”

By expanding the service package with the sale and commissioning of Yaskawa robots, the company has increasingly received requests  to provide the handling systems around the robots in recent years. This enables customers to largely automate their production lines. Because Produlas saw a good future in this, it was decided to change the name Produlas to Roboflex; a name that better covers their activities. The company now mainly focuses on the engineering, production, assembly, delivery and commissioning of robot automation in the broadest sense of the word. As much as possible is produced in our own hall in Oosterhout; whether it concerns machining operations or assembly work. External parties are only engaged to coat the parts. 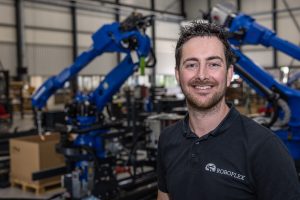 Tommy Hofkens: “We also have a preference for special, large projects in which our knowledge of both welding and automation is essential for achieving a good end result. In most cases we use a 6-axis Yaskawa robot that we program ourselves. Because we are also a recognized system partner of Yaskawa Benelux, we also carry out projects together with them. Incidentally, not only the technical performance is discussed, but maximum efforts are also made in terms of safety and ergonomics to enable people to work as well and safely as possible.” 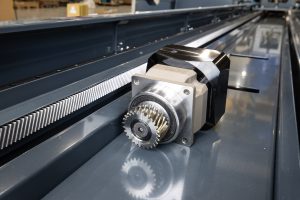 Back to Maurice Kassenbouw who indicated to Roboflex that the Yaskawa robots needed to be replaced. Because this company is always working on innovation and technology, a 1:1 replacement of the robots was not an option. It was therefore soon decided to look at the possibilities for automation.

The first designs for a new production line were made at the digital drawing board. This starts with inserting the individual parts, such as top and bottom edges, diagonals, end plates and gusset plates in a mold. After a check, the mold with parts is passed on to the welding robots that make the welds and bend the product (provide pretension). After welding, the products are stacked by a specially designed crane. The mold is then transported back to the beginning of the line where the process is repeated. 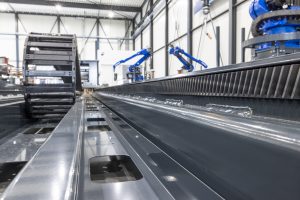 Tommy Hofkens: “You always start by drawing up the construction of the line, taking into account dimensions, weights, desired buffers and so on. Initially, a circular arrangement was assumed, but in the end two linear arrangements were chosen that literally run from one side of the hall to the other. They occupy an area of 20 x 20 m. When a spatially appropriate solution was found, the required robots were drawn in. These are also based on dimensions and weight, but of course also on cycle times. This first design was then calculated on the basis of technical and financial feasibility. In this case, this resulted in four critical points for which we conducted additional feasibility studies. In the end, the contract was awarded to us.”

In the final design, the production line includes the automated supply and removal of the various greenhouse parts and a large number of Yaskawa robots have been selected for the welding installation. Two large robots for handling parts that can measure up to 13 m (including the box sections) and four smaller handling robots. Six welding robots were also deployed per line to make the welded connections and specimens that take care of the welding. The handling and welding robots are placed on tracks that move along the line by means of a rack. A servo motor is used to drive each track with robot, which is also considered the seventh axis of the robot. 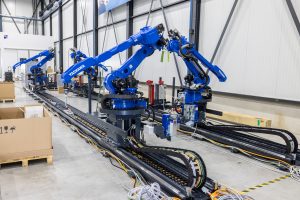 The welding work is performed by 6 Yaskawa AR-3120 robots. These are the largest 6-axis robots in this range with a working range of 3,124 mm and a payload of up to 20 kg. The cables are fed through centrally and through a hollow shaft so that they cannot come into contact with the workpiece. This contributes to, among other things, better accessibility to the welding workpiece, but also a longer lifespan of the cabling.

All welding robots are equipped with an LSQ5 power source that does not use the usual inverters but works on the basis of ‘Direct Control Technology’ (DCT). This technology makes the required energy immediately available for the welding process without delay, which benefits the dynamics and accuracy of the welding process. The flexible fine-tuning is done by a CPU that continuously monitors the welding process and adjusts the current or voltage based on the findings. This not only leads to a high accuracy, but also to a lower heat development, which also benefits the quality of the weld.

Tommy Hofkens: “All robots are controlled via a YRC1000 controller. This makes synchronized operation of up to eight robots possible, which is certainly more than sufficient for this application. The robots are programmed in-house, which means that any adjustments as a result of process optimization at the greenhouse builder or changes in the configuration of the line can be quickly realized by us. Furthermore, the operation is so simple that the user does not have to program the robots himself. The customer can load the 3D model of the lattice girder into our own software. The robots are automatically programmed from these models and then controlled. This is certainly an important feature for this greenhouse builder, as all orders are customer-specific. In principle, each subsequent assignment is different with regard to the desired profiles, the dimensions and the number of welding points. Adjusting the robot programs is therefore a daily job.” 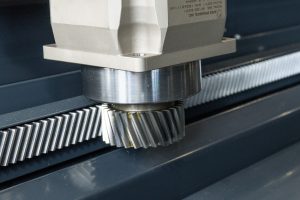 Finally, to set up an accurate and reliable production line, a stable construction is needed. For a line of several tens of meters long, this means extra attention for the gearboxes, pinions and racks on which the robots move. For this type of product, Roboflex has been working with Apex Dynamics for a long time. 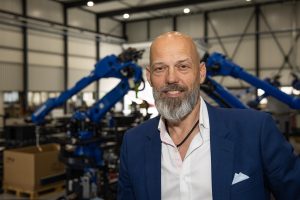 In the four sets of gearboxes, a module 2 pinion with helical teeth is mounted on the output shaft. This engages a total of 28 meters of rack – divided over parts with a length of 1 meter – with, of course, also helical teeth in quality Q6M. Eric Megens is Sales Manager at Apex Dynamics and states: “This type of pinions and racks can be produced with a high precision and provides exactly the properties needed for lines as long as this. Pinions were of course also supplied for the second set of gearboxes, but in module 3. Here too, the choice was made for the helical teeth and associated racks with a total length of 32 meters.”

Corresponding PU lubrication pinions are also supplied for the lubrication of the ten pinion/rack and pinion drives. This includes all connectors for the hoses that supply the lubricant.

Tommy Hofkens concludes: “The cooperation with Apex Dynamics has been particularly good for years, partly due to the short delivery times and simply because we have a good click. Our engineers are also very pleased with the simplicity with which they can find and select the desired products on the website. In addition, they can download the corresponding drawings directly and integrate them into their own design. This saves time and reduces the chance of errors. Of course, the quality also has to be right. And well, if you never have problems, don’t get complaints from customers and everything is running smoothly, then I think this is okay. In that respect, the supplier is just as important as the customer. I look back on this project with a good feeling. The automated welding line is maximally geared to the work of Maurice Kassenbouw and is safe and ergonomic for the employees. Due to the high degree of automation, the company has considerably reduced the number of man hours for this part of the production. Incidentally, this does not lead to redundancies for the greenhouse builder, but to the possibility of taking on more assignments and a decrease in the pressure to find more good people.