Home » Newsarchive » ‘Automating everything, that makes it fun’

‘Automating everything, that makes it fun’

Eight million water bottles a year. The output of the Tacx factory in Wassenaar is huge. This requires thorough automation, provided by Johan van de Wiel Moulds & Handling, and the flexible mechanics of Apex Dynamics.

Tacx, cycling enthusiasts will recognize the brand of the exercise bike that they may have in their garage and to which they have regularly connected their racing bike in recent years and have made many virtual kilometers. What they probably don’t know is that Tacx is a Dutch company that has completely housed production in house and is located in the provence Zuid-Holland.

“The pandemic has done us no harm,” says Peter Tacx, who now runs his father’s company with his brother. “These exercise bikes are perfect for cycling at home. Last year we produced about four hundred thousand in our factory in Oegstgeest.’

That large number is not only due to the pandemic. Garmin acquired the Zuid-Holland company three years ago. Tacx has been able to increase its production by more than two thirds via the huge distribution and sales network of this navigation giant. “Garmin was looking for a manufacturer of exercise bikes so that it could connect its cycling computers. The Garmin Connect fitness tracker has about 100 million users. If you can link them all to an exercise bike, that’s a nice business, of course,’ says Tacx with a sense of understatement.

In addition to those exercise bikes, Tacx has been producing water bottles for many years. A nice summer counterpart to the exercise bikes, which are mainly sold in the winter. The factory in neighboring Wassenaar delivers seven to eight million beverage bottles every year. “These are mainly advertising objects. Pay attention when the cycling season has started again, because then you will almost certainly see our bottles pass by’, says Tacx. His company produces a few types, but the variation is mainly in the different colors and special prints. “We have a large stock here, so we can print quickly and also deliver smaller series.”

Tacx attaches great importance to technology and automation. When son Peter started in his father’s company in the mid-eighties, he gave it a major boost. ‘I try to automate everything; that makes it fun and challenging’, says Tacx, who bought his first robot back in 1986. ‘A welding robot, because I didn’t want to have to weld all those exercise bikes by hand. It was quite a bit of trouble at the beginning because the robot broke down every time. We have learned a lot from that. The robotic arms we have now are fantastic. They only break if I do something wrong myself.”

The bottle manufacturing is also largely automated. In the Wassenaar production hall, four extrusion blow molding machines eject bottles almost continuously. A Kawasaki robotic arm at each machine transfers the bottles to a cardboard tray, which can hold more than one hundred and sixty. A large robot shuttles up and down those dispensing points and collects the full trays and stacks them on a pallet.

‘With all the automation, we want to be able to run for at least twelve hours without human interference,’ says Tacx. “A whole weekend is not a goal yet. With regard to the supply and disposal of materials and water bottles, you then end up in a completely different playing field. I have looked at a solution with AGVs, but those systems are still very much in their infancy. That’s not it for me yet.”

Tacx can now handle the water bottle production with two operators. Has he ever considered using cobots? ‘Yes, but in terms of software they are not nearly that far yet,’ says Tacx. “I also like to keep it simple. As a non-specialist, I just want to be able to make small changes myself. In the current setup, that works very well.”

When it comes to automation, Tacx works very regularly with another family business: Johan van de Wiel Molds & Handling. Son Marcel van de Wiel: ‘We are now working on project number 180. We have been supplying molds for their injection molding machines for about thirty years. Such a mold must last at least ten million shots. To guarantee this, you have to choose the right materials and use the right coatings. And the structure also has to be just right. We are specialized in that.”

A good example of the innovations that Van de Wiel helps with is a recently developed cap mould. ‘We were asked by Tacx whether we could make the unscrewing of the caps from the mold electrical’, says Marcel van de Wiel. “The challenge was that there is of course a screw thread in such a cap, so you have to turn it out of the mold with a spindle. We have achieved this with servo motors with which we achieve the same specs as with the old hydraulic solution.’

The company from the city Drunen, originally a pure mold maker, has received more requests from customers in recent years to take care of the automation in addition to those moulds. “We added the handling business a few years ago,” says Marcel van de Wiel. “Almost everything there is customer-specific. Of course we try to come up with things that we can use several times, but in the end every customer wants it just a little bit different.’ 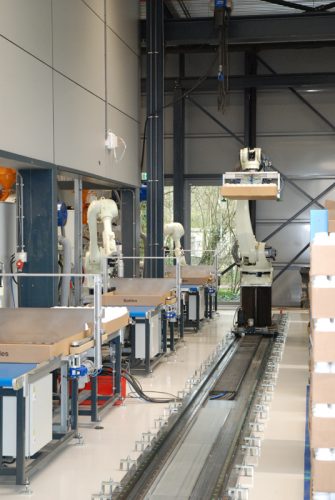 Tacx once again called in Johan van de Wiel for the water bottle production line. Peter Tacx explains: ‘It was a challenge to get all robots to communicate well with each other. That has now been solved by making them wait for each other. When a collection box is full, the system gives a signal to the large robot, who will then come pick it up. If another blower also has a box full, he just has to be patient. There is that space, because the large robot has already prepared the next empty tray, so the injection molding machine can move forward.’ The distribution robot could also move even faster, but that is not necessary at the moment. “Maybe if we ever need more capacity and make the track longer.”

The system is prepared for such an expansion. Johan van de Wiel’s engineers have split the twenty-metre-long track on which the large robot drives into two-metre segments. ‘It is also much easier to produce than if you try it in one or two pieces,’ says Marcel van de Wiel.

The manufacture of the track sections required the necessary attention in any case. ‘They really have to be 100 percent suitable’, explains Van de Wiel. ‘It is easy on the drawing, but they also have to carry it out in the workshop. And after that you need to think carefully about the coupling and how to align them perfectly. From a mechanical point of view, that was the biggest challenge.”

A lot of variables 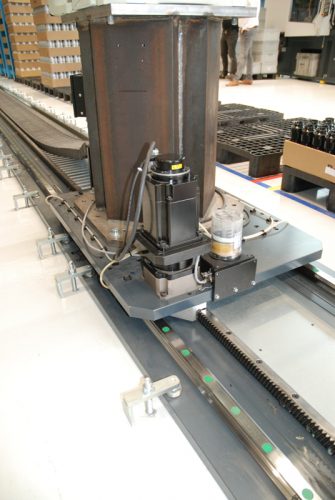 Johan van de Wiel has inquired almost all servo-mechanical parts from Apex Dynamics. “We calculated and supplied the racks, pinions, gearbox and lubrication system,” explains sales manager Eric Megens. “The large robot is equipped with an extra motor that Tacx uses to control the seventh axis: the movement over the track.”

In addition, Johan van de Wiel appealed to Apex Dynamics to get an optimal configuration. “It’s a comparison with a lot of variables,” says Megens. ‘You can vary in the module, the number of teeth, the accuracy, the torque, the feeding force and the speed, among other things. You can turn all those knobs. In this case, the robot’s motor was the starting point and we looked for the best solution from there, based on variables such as the desired accuracy, speed and cost.’

Apex Dynamics has also developed the lubrication system on the base of the robot. ‘That is a PU gear that moves with the robot and ensures that the racks, linear guides and bearings remain well lubricated. You can also do this by hand, but then you either apply too much or too little’, says Megens. “With the PLC-controlled pump you have that under control.”