The mission of the Human Power Team to improve their own world record speed cycling in Nevada failed. The mixed Amsterdam and Delft student team encountered many setbacks and lost the existing record to the Canadian team Aero Velo. Also this year the Human Power Team used our latest generation of PSII-B-004 gearbox driving their bicycle.

Reflect and come back stronger. That will be the motto for the next team of the Human Power Team Delft and Amsterdam. The VeloX V was a fantastic project, but the team was unfortunate at the ultimate test in the American Battle Mountain. 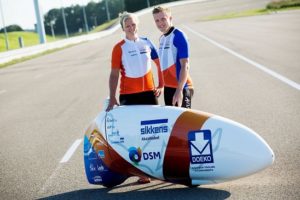 Gusts, software problems and a crash bothered the ambitious students, during the World Human Powered Speed Challenge which took place from September 14 till 19.The announced goal was with the latest model VeloxV to surpass the previous ridden world record of 133.78 km/h, set two years ago by a delegation of the HPT with VeloX 3. The team also wanted to improve the world record for women (121.81 km/h) which is in in French hands.

Robert Braam and Lieske Yntema had to give up their world record attempt after a crash in which the VeloxV was badly damaged. (Photo by Bas de Meijer)

Design, using an Apex Dynamics PSII-B in the drive system

The first qualifying runs did not go as desired. Not really ideal weather conditions played both Robert Braam as Lieske Yntema tricks. Both drivers crashed due to a gust. There were also problems with the overlay system, which displays the data on the monitor. The drivers under the closing cap depend on this system for navigation. After both of the drivers qualified themselves on the short track record for the races on the long path, a path of eight-kilometre run and a 200-meter stretch where the key rate is measured, the real work began. Yntema cycled a speed of 86.7 km/h on Wednesday, a day later Braam clocked an average speed of 98.3 km/h. During the same morning-runs Todd Reichert of the Canadian team Aero Velo improved the Human Power Team owned speed record, achieving a speed of 137.9 km/h. 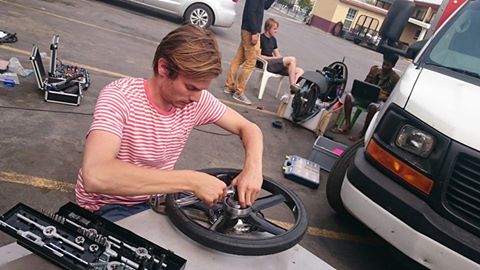 On Friday morning disaster hit again when Braam crashed at high speed. He seemed virtually unscrathed, but the bike was so damaged that a start on Saturday was not possible anymore. Meanwhile Todd Reichert twice broke his record which now stands at 139.5 km/h.