After the finish of the successful DONG solar challenge we may disclose which technology was used by the Dutch ROC Friese Poort Sneek team. They completely rebuild and redesigned an AT-LM with counter rotating output shafts to create a technically complex drive. The boat – actually a catamaran-  of team ROC Friese Poort Sneek has a central, solar energy powered engine which drives this counter-rotating propeller. As a result of this, the thrust increases and there is an absence of the propeller effect which makes steering corrections unnecessary. This increases the efficiency of the entire boat so much, that it can lift itself out of the water for minimal resistance. 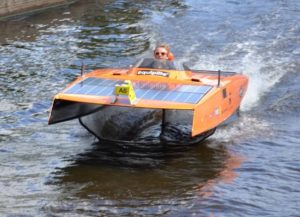 Counter rotating propellers are two coaxially arranged propellers which rotate in opposite directions. This design comes from John Ericsson, who invented this back in 1836. Because of the technical complexity, however, it is not frequently applied.

The advantage of this design is that the second propeller uses the rotational energy of the first screw for maximum efficiency. Above this, the drive has no screw effect, which is especially important for torpedoes. In general, the rear screw is smaller than the front and the number of blades is not always the same.

The ROC Sneek adapted an Apex Dynamics AT-LM in such way, that a driven shaft rotates in a counter-rotating shaft. 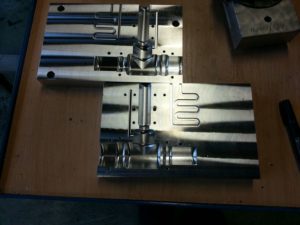 According to the designer of the drive of the ROC Friese Poort Sneek boat, Wart Steneker: “It was an awful tough week for us with many setbacks. After the second day we were nominated for the innovation award, because we were the first boat in the A class that could lift itself out of the water during sprints due to its underwater wings. However the next day during a sprint it went wrong, the left wing had hit something beneath the water which caused us to collide against the quay at full speed. That night, we have worked hard to make the boat ready for the next challenges. We ultimately finished as 8th overall, unfortunately there was nothing more we could do after the crash.

As the drive is concerned, it worked perfectly and was very efficient! I’m done with my education now and begin next school year with a new study on high school. Thanks for all the help in selecting the right drive! My successors will further adjust the screw design and improve the boat for 2015 competition”