Gear History – where do gearboxes originate?

Gears were a logical continuation of the invention of the wheel. That gears are called the biggest invention after the wheel is not unthinkable. In any case, we can’t live a normal day in our lives without gears : without gears no production, no energy and no transport. The use of gears is so obvious that we never dwell on where they come from. In this article, out of respect for the gear, we will detail the interesting history.

Until now, the Greeks were given the honour of the invention of the wheel. Estimated that they were first used 300 years BC in Alexandria for the first time this mechanism.

From unofficial writings show that in China already 800 v.C. differentials (a system of gears) were made. The first gears were made of wood, with wooden rods and teeth. Worn teeth could thus be replaced separately.

By the year 100 v.C. the Greeks used metal gears with cylindrical teeth in complex computing equipment and astronomical calendars. We know this by the discovery of the Antikythera Mechanism (see picture), the oldest known gear machine. This around 100 v.C. produced mechanism was found in 1900 in a wreck off the coast of the Greek island of Antikythera. The mechanism contains more than 30 gears for complicated astronomical calculations of time. Was this actually the first computer/ In later centuries, the gear was one of the most important parts of modern technology, incorporated into almost all the mechanisms, machines and vehicles.

Gears are actually a natural product 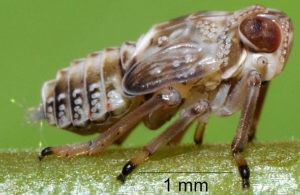 But were the ancient Greeks really the inventors/ Research biologists at the University of Cambridge are certain that the ancient Greeks were not the first. The three millimetres small bug Issus coleoptratus, a lantern bearer like those in Europe and North Africa, uses this mechanism already for millions of years. The gear is not a human invention of the ancient Greeks, but a mechanism that arose through evolution in nature.

See right a picture of a baby lantarn-like insect.
Nymphs of the insect have an ingenious system of gears that causes their rear legs “click” together and at the same time to run away and then jump forward. Using electron microscopy and high-speed cameras biologists captured the precise operation of the insects’ mechanism. It is known so far as the first working gear system from nature. 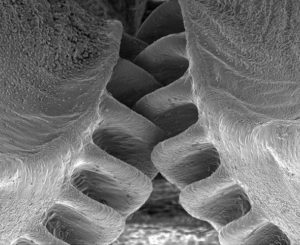 The researchers think that the animals use the mechanism to coordinate their jump. To jump straight ahead, both legs should be activated at the same time. If one leg is activated a split second earlier, the insect would be off balance and fall to the right or left. That’s because the legs sway to the side. Gears are a smart way to avoid this.

The gear wheels sit on the top of the rear legs. Every ‘tooth’ is between 30 and 80 micrometres thick, and in total there are between 10 and 12 teeth on each leg. The teeth have a rounding at the bottom to prevent wear, engineers added this years on their designs. Nature was in this case clearly a lot faster than human progress.

Photo of the gears on the rear legs of Issus coleoptratus, taken by an electron microscope (source Malcolm Burrows).

At Apex Dynamics, we are to both the Greeks and the serrated insect very grateful. Every day, we provide our clients our gearboxes for the most diverse applications. Gear boxes that ensure high precision and a long lifetime. And although we cannot change history, we would like to change the future by “running faster” for our customers.