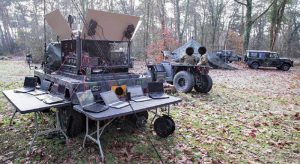 The transition to electric driving has also not gone unnoticed in the military environment. This form of drive offers some striking advantages such as silent operation and immediately available torque. The company REEQ developed a hybrid quad according to this philosophy. In addition, the vehicle can also supply a camp with electricity via a SmartGrid box.

‘Rob Verbruggen from Reeq (Range Extended Electrical Quad) tells the story: ‘In 2017 we developed a simple prototype of a hybrid vehicle, which we had tested by the Dutch Korps Commandos (comparable to the Belgian Paras, ed.). That first vehicle was still very simply constructed, we initially wanted to check whether such a system can also be driven electrically in the field. 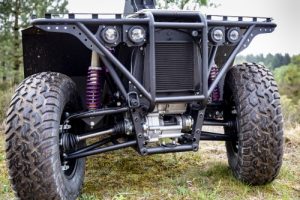 The response from the military was positive and we were advised to further develop the vehicle with military specifications. In the meantime, in addition to this project, we were also working on the design of a platform for a series hybrid vehicle, with 2 electric motors, a 16 kWh battery and a 20 kW diesel generator. Two types of vehicles can be built on the platform, a buggy and a quad.

It is also possible to add a ‘micro grid box’ functionality to that platform to allow the vehicles to function as a kind of driving generator. The vehicles can thus supply up to 16 kWh of energy to encampments. This of course contributes enormously to flexibility, also because the system with the SmartGrid box is bidirectional. So you can feed the encampment, but just as well connect a solar panel or small windmill to it.’ 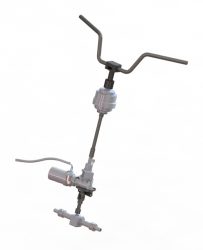 “A worm gear transmission was often used in power steering. Via a torque sensor, the amount of torque required is fed back to the engine. An ordinary vehicle today uses a rack & pinion system. In addition, a steering wheel can make three to four turns left or right, so that you can quickly turn up to 1000°. This is not the case with a quad, here you are limited to 90°. That means that your transmission must be quite strong, because the same force of normally 3 to 4 turns now myst take place within this 90° of turning. Moreover, this must be done without backlash and of course it must be sufficiently robust. That is why we rely on a low-backlash gearbox from the AE series from Apex Dynamics. The worm gearbox has been replaced by a planetary gearbox and the 7:1 ratio provides sufficient torque for the power steering. This keeps the quad manageable and precisely controllable.” 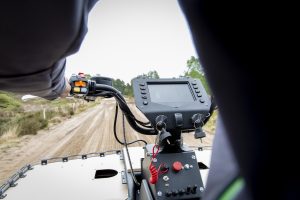 In addition to the aforementioned function of briefly serving as a power supply for encampments, this hybrid approach has other advantages that certainly generate added value for military assignments. Rob Verbruggen: ‘First of all, thanks to the electric motors, you can move around silently. The energy supply is also very quiet, especially if you compare it with a standard diesel generator. In addition, it is also much more flexible to provide your energy via quads with a box, because getting a diesel generator on site in remote or difficult areas is not an easy task. The micro grid box weighs only 30 kg and can also be disconnected from the quad and powered via a solar panel or windmill. So the quad can remain mobile when needed, while the encampment continues to get energy. The generator can continuously supply 10 to 12 kWh, and peaks of up to 20 kWh are no problem.” 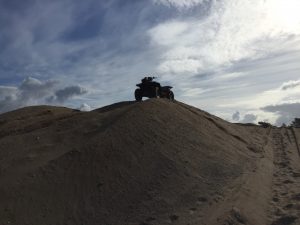 “Driving on complex terrain with a hybride quad is completely different from other drive systems, because the torque is immediately available in full. There is no delay in the drivetrain because the gearbox is missing. In addition, it is also possible to set the torque in a targeted manner, so that you can place more power on the front or rear wheels. The quad can permanently reach a speed of 70 km/h and thanks to the 100 liter diesel tank, the vehicle has a range of 1000 km. It is also possible to make a fully electric version, but at the moment the focus of defense customers is mainly on the hybrid version. The interest is now enormous, we get plenty of requests for demos from all over the world.’

“In the meantime, we are also working on autonomous control, in which the vehicle can be used as a transport unit. This approach is also extremely suitable for reconnaissance assignments. One of the applications of great interest is the setting up of remote communication posts. The enemy obviously has a great interest in taking out these posts. If the design of such a system has to be done by manpower, there is always a risk of human loss. If the quads are used here as an autonomous vehicle, you avoid that. For the control we can rely on a simulator. This not only serves the training of drivers, but can also be used for autonomous vehicles as a platform that provides real-time feedback to the operator.’

Apex Dynamics was closely involved in the project, because the low-backlash gearbox is theirs. Thom Van Oss (Apex Dynamics) explains: ‘Basically, it makes little difference to us whether we work for defensive applications or, say, the food industry. We have built up some expertise in defense within the worldwide group of Apex Dynamics, for example, with our low-backlash gearboxes we are present in radar systems also familiar with similar applications.’ 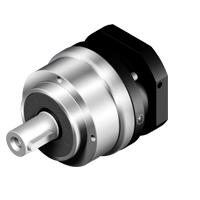 ‘In this case, the choice was made for the stainless steel type AE with a backlash of ≤ 8 arcmin. If it is necessary for an end customer to install a gearbox with an even smaller backlash, we can do that too. The backlash must be kept to a minimum because the sensitive torque sensor would continuously detect the chattering of the gears and transfer it to the system. Driving the machine would be a lot less pleasant if there was too much backlash. This is a standard product for us, it is not a specific product for the military market. But just because it is a standard product, it is easily available worldwide. This is of course also important for military applications that are deployed internationally, because you want to be up and running again as soon as possible.’ 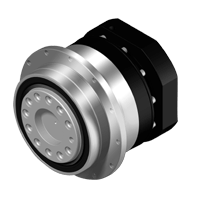 Rob Verbruggen: “The support of Apex Dynamics is important to us, mainly to select the right type of gearbox. We indicate which torques, which output shaft and which application we have in mind and they give us advice. For example, we are considering changing from a shaft to a flange output. This is necessary because we want to be able to stack the quads better for transport. The flange output shaft gives us more flexibility to be able to easily disassemble the handlebars ourselves to make the vehicle stackable.”