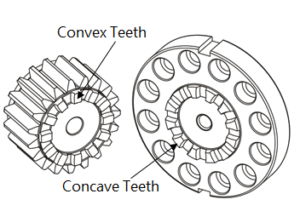 Why would you use a pinion with a Curvic plate coupling? This type of coupling for high-end pinions offers a number of significant advantages and has been introduced by Apex Dynamics. We would like to give some attention to this superior coupling and explain the different types in this article.

Apex Dynamics introduced pinions with a Curvic coupling in 2016 in response to a clear market demand. The main reasons for this development were :

The teeth of the pinion are convex ground (barrel-shaped) while the base plate (or APC High Torque flange) are concave ground (hourglass-shaped). That is for an optimal connection and even distribution of the load between the parts.

But if it brings such large benefits, why don’t we see this type of coupling more often?
The main reasons for this are that high-quality machines, high-quality materials and highly trained personnel are required to produce a good Curvic coupling. We therefore see these couplings in demanding markets such as aerospace and energy plants.

The origin of the Curvic plate coupling

The principle of this coupling was invented by the very successful German engineer Albert Hirth (1858 – 1935). He started the companies Norma Compagnie GmbH (ball bearings, later taken over by SKF), Fortuna Werke (packaging machines) and KACO (Seals for the automotive), in addition to his Hirth AG (camshafts and gears). In his life he applied for more than 350 patents and was therefore called the “Swabian Edison”. At the age of 73 he applied for a patent for a “four-color pen with one-hand operation”. Don’t we all know that one? 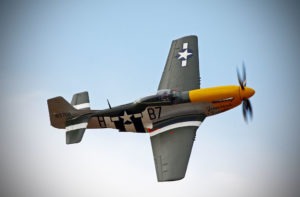 Now, 100 years later, the names Hirth-Minimeter and Hirth-coupling are still known! The principle of the Hirth coupling was picked up by an American manufacturer of gearboxes, it was improved and renamed Curvic coupling. Curvic couplings were first mass-produced in 1942 to meet the need for couplings that require extreme accuracy and maximum load capacity, along with a high production speed. The outbreak of World War II accelerated the introduction and the number of applications. For example: the crankshafts and turbines of the P54 Mustang or B29, among others, were equipped with curvic couplings.

The development of the Curvic coupling stems directly from the production of spiral conical gears, which were made on the same machines and with similar production methods. The term “Curvic” refers to cams on a circle that have a characteristic curved shape when viewed perpendicular to the coupling.

The three basic types of Curvic couplings are

In all cases, this type of coupling offers good precision centering, a high load-bearing capacity and it is free of backlash.

The semi-universal coupling is also a precision coupling but is loosely coupled to allow a maximum of 2 degrees of skew of axes together with an axial play. The teeth of one part usually have a curved profile to keep the load centered and to transmit an almost uniform movement. 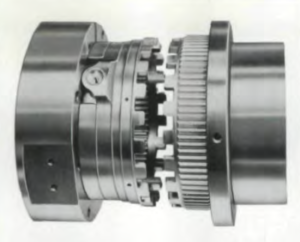 The decoupling couplings are designed and made in such a way that the correct ‘tooth contact’ is maintained while the coupling switches on and off. In the larger sizes, a spiral-shaped surface is used to achieve this. For small couplings, this action is approached by a specially located tooth bearing. The two parts of a switch or overload coupling are usually held in place by spring pressure. Switch couplings are nowadays used in a large number of applications, including cars, agricultural machines and tool changers. Couplings can be produced by sawing or grinding, depending on the required accuracy.