Home » Newsarchive » Solar Voyager on its way to Iceland: cleanest expedition ever

Solar Voyager on its way to Iceland: cleanest expedition ever

In the winter of 2017 Edwin ter Velde and Wilco van Rooijen will drive to the geographic south pole with a solar-powered terrain car. The gearboxes in this 3D-printed vehicle are from Apex Dynamics and we keep an eye on the latest developments in this project. This article is an update because Edwin Ter Velde has not stopped since our previous post. The trip is now really close and the preparations are full in progress.

On April 21, 2017, both adventurers presented the SolarVoyager to all partners. 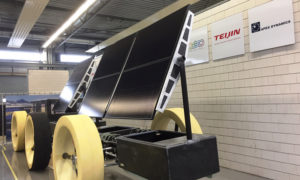 The vehicle is not finished yet, but almost all components are present and we saw a particularly futuristic vehicle with trailer. The second trailer is still under construction, which is a copy of the first. The following aspects were highlighted during the presentation:

A lot can go wrong, so many systems are executed redundant (double). For example, you’ll see a kind of bow shape in the trailer. Should a wheel or drive break somewhere, the wheels can be removed from and the trailer will be used as a sledge. 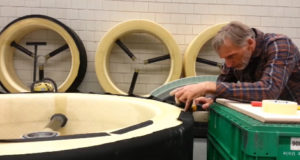 Different types of tires have been tested, including “balloon” (air-filled) tires and “hard” 1.6 meter diameter tires. Against all expectations, the last one seemed to perform best on rough surfaces. Another rubber layer will be glued to the yellow wheels for even better grip on snow and ice. During the tests in Iceland, the “tires-choice” will be continued.

The Apex Dynamics PD090 low backlash gearboxes are fully encapsulated and insulated for even higher efficiency. 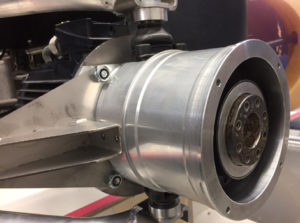 In a freezing cell, arctic conditions are simulated to see how the entire drive behaves at -/- 50 degrees Celsius. And of course, the four drives will be tested extensively in Iceland.

The SolarVoyager has a self-carrying body and is made of recycled waste material, which has been transformed into 3D printer wire. From this 3D wire, hexcores are printed which fit like a kind of puzzle. Afterword’s these hexcores are reinforced with composite, resulting in a super light and very strong construction. For your information: The Solar Voyager’s target weight with 2 trailers, including solar panels, battery pack and control is 1000 kg! 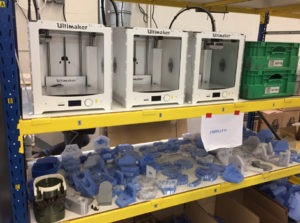 As a test, some samples have been printed in Carbon with the Ultimaker 3D printer. Smooth and super strong. For example, the hinges are printed in 1 passage and have passed all tests. To give an idea of the harsh conditions on the South Pole: On the hinges is an arrow printed which says “above”, but why? “Well,” says Edwin, “The hinge consists of a series of printed bowls and spheres that can rotate together. If the bowl is bottom mounted, water can stand in and freeze. Then you cannot open the door anymore.” Also, the steering wheel, steering cable attachment and steering house are made with the 3D printer.

The team is now working hard to ship everything to Iceland for the first ‘real’ trial.

In our previous article, we have already written about all the dilemmas, problems, demands and dangers that this 2300 km long journey on the world’s most dangerous continent will encounter. The team is testing the material in all possible circumstances and situations, so that they will be prepared as good as possible. The first “real” test is the upcoming trip in Iceland where the team will try to get as close as possible to the South Pole conditions.

Meanwhile, the container has been loaded with the SolarVoyager, which will arrive in about a month on Iceland. Followed by a comprehensive test. In Iceland, the team gets help from a company that adjusts vehicles for inhospitable areas. But this company only has experience with vehicles based on a fuel engine. They will carry out heavy tests with the SolarVoyager, so now they will learn from this clean vehicle and this clean expedition. 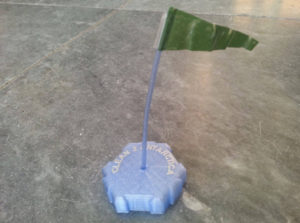 Schedule: from Iceland to the South Pol

We will keep you posted on the latest developments around the expedition, and of course we ourselves also are very curious about the results of the tests in Iceland. If you want to support this project yourself, you can buy a “hexcore”, these are the basic elements where the vehicle is built from.