Home » Newsarchive » URE has been pushing boundaries for fifteen years

URE has been pushing boundaries for fifteen years 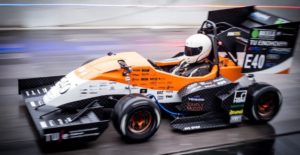 The automotive student teams at TU/e are the publicity and technological showpieces of the university. For years now, Solar Team Eindhoven, STORM and TU/ecomotive have been providing the media world, in print and video form, with fascinating material. But all these teams are following in the footsteps of a single predecessor: University Racing Eindhoven. Or, as it was still called in 2003, Formula Student Racing Team Eindhoven. This year URE is celebrating its third lustrum. (written by Tim Gerth, Cursor TU/e)

Before the new season gets underway, marked by the Formula Students Netherlands next week in Assen on the TT circuit, Cursor looks back over the rich history of the oldest student team at TU/e. Over the years URE has matured into a team that now collaborates with 89 partners, has inspired 130 thesis reports, and throughout 13 active seasons has been on the starting grid at 33 events and has won 30 podium places.

In terms of publicity, URE scores perhaps a bit less prominent in the media as the other teams do and its profile within the university is sometimes a bit of a struggle, but nonetheless, dips have always been overcome and the eyes of every team are set firmly on the future. It isn’t universally known but every year the team has to build an entirely new car and every year the team chooses to innovate. In the competitive battle with hundreds of other universities this is sheer necessity, because to stand still is to go backwards. And although the team has fallen down and had to get back up more than once, coming to a standstill has never been an option for URE in all its fifteen years.

In September 2003 six enthusiastic students embarked on a two-year project to develop a racing car of their own. These years were devoted chiefly to building the team and gathering support within the university. It is a phase that every team must undergo, but in those days the process was very different than it is now. The university was a fair bit smaller and so the lines of communication and responsibility were shorter. The main focus of the Department of Mechanical Engineering was to better prepare students for the move into industry.

In 2006 FSRTE’s first real racing car was born. That year, the FSRTE02 was the team’s first car to take part in the Formula Student competition and it picked up a prize immediately. With an award for the most original design under its belt, FRSTE, which would change its name to URE after that season, headed for home.

Back then the Formula Student season in Europe consisted of only two events: FSUK in England and FSI in Italy. Here, thanks in part to reliability issues, FRSTE02 finished in 29th and 13th place respectively.

In 2007 the first URE car took to the road. The team grew to 61 members and that season for the first time their car – the URE03 with its light, aluminum chassis – reached the finishing line of an endurance element. This was achieved at the renowned Hockenheimring, which has been the stage of Formula Student Germany ever since. Years later this competition developed into the unofficial world championships. At the first edition, URE finished twelfth among the 54 participants. A year later URE was on the starting grid for the first time with a multi-link suspension, which helped secure the team the prize for the best design at FSUK. The URE04’s strongest result overall was ninth place in Italy.

The URE05 was the last car in URE’s fuel-driven era. Now, for the first time, carbon instead of aluminum was used to produce the chassis. This saved some 25 kilograms (from 256 to 231 kilograms). With the URE05, the team came fourteenth at the Hockenheimring, in a strong field of 78 cars. In Italy they won second prize for their business presentation.

As the first team in the Netherlands to do so, URE switched in 2010 to an electric powertrain, and went on to build the first electric racing car in the Benelux. This was URE’s most successful year. The team never failed to achieve a podium place with URE05e. Third place in Silverstone, second in Hockenheim and the winner in Austria; to this day the only overall win in the team’s history. The car that was used was identical to the URE05, except of course for the electric powertrain.

The following year the team had its own tires when it faced its competitors. URE was the first team in the entire Formula Student competition that managed to develop a unique tire, together with its partner Vredestein. The team finished in every event, a unique achievement in the team’s history.

That year URE achieved its greatest successes in England. With a second place in the acceleration element, and third places in the skidpad, endurance and business presentation sections, the team finished in third place in the overall standings. At Red Bull Ring there was another podium place; URE came second among the eight participants, and the URE06 was voted the most efficient car. In Hockenheim, where there was much stronger competition in a field of 28, URE came sixth.

The team took its next step in 2012 when it introduced its own rain tires. These gave the URE07 its best result during the skidpad element in Germany, which is traditionally driven in wet conditions. Nor did the overall performance at the unofficial world championships disappoint that year: fourth position. At Silverstone, during FSUK, URE came second in the acceleration test and won the price for best cost accounting.

With the URE08 the transition was made to a fully carbon monocoque. With a view to saving weight, of course. And it made a considerable difference. The car’s weight was brought down by 18 percent (some 45 kilos). In Barcelona the team was on its way to victory when a wheel came loose during the endurance test. They finished first in the static elements and also took first place in the acceleration element. But with their technical failure in the most important element, the team was able to manage only eighth place in the overall standings.

In 2014 URE took another big step when it installed an aerodynamic pack on the car. Large front and rear wings were intended to create extra grip. After the previous season’s unfortunate incident more emphasis was placed on reliability, which in subsequent years would play an ever-increasing role. The team secured an impressive fifth place during FSG at the Hockenheimring.

While URE continued to deliver good performances, the competition in Formula Student wasn’t standing still either. The Eindhoven team may have been the first to have its own tires, but these days all the big teams use specially produced rubber. When it comes to aerodynamics, for many teams this was already an important consideration, but at URE it was still in its infancy. And to be a serious contender for prizes, four-wheel drive was a must-have. And so in 2015 URE made the switch with URE10 to four motors.

The team developed its own motors, drawing on knowledge present at the university. The concept they came up was widely praised and even today is still in use and being improved on by the current generation of cars. As early as 2014, the team presented its concept and won first prize with it in England. Ultimately it would prove too big a step for the URE10, which did most of its shining off the track, although at the end of the season it did manage to win first prize for its efficiency.

In the years that followed, with the URE11, 12 and 13 the main focus was on improving reliability, since the team had complete confidence in the car’s speed. With the URE11 big steps forward were taken with the engines, but the results were disappointing. Aside from a second place for cost performance, there was little to write home about. The concept’s speed was left in no doubt, however, at the first edition of Formula Student Netherlands, where a year later the URE12 took home five trophies. But, again due to technical problems, the team missed out on overall victory. URE came fourth in Assen, eighth in Austria and twelfth in Spain. A huge disappointment for the team in 2017 was not being invited to Formula Student Germany, annually the highlight of the season.

With the URE13, for the fourth straight year the team is focusing intently on getting results with the concept of four hub motors. After that it will be time for a new step. Again, the Eindhoven team has shown its innovative nature by opting to pursue a parallel project in which it develops the Benelux’s first self-driving racing car. The ‘old’ URE11 is being converted for self-driving.

This summer the team of URE13 will for the first time attend no less than four events: next week July 9 through 12 the FSN in Assen, after that FS East in Hungary, FSG in Germany and FSS in Barcelona. 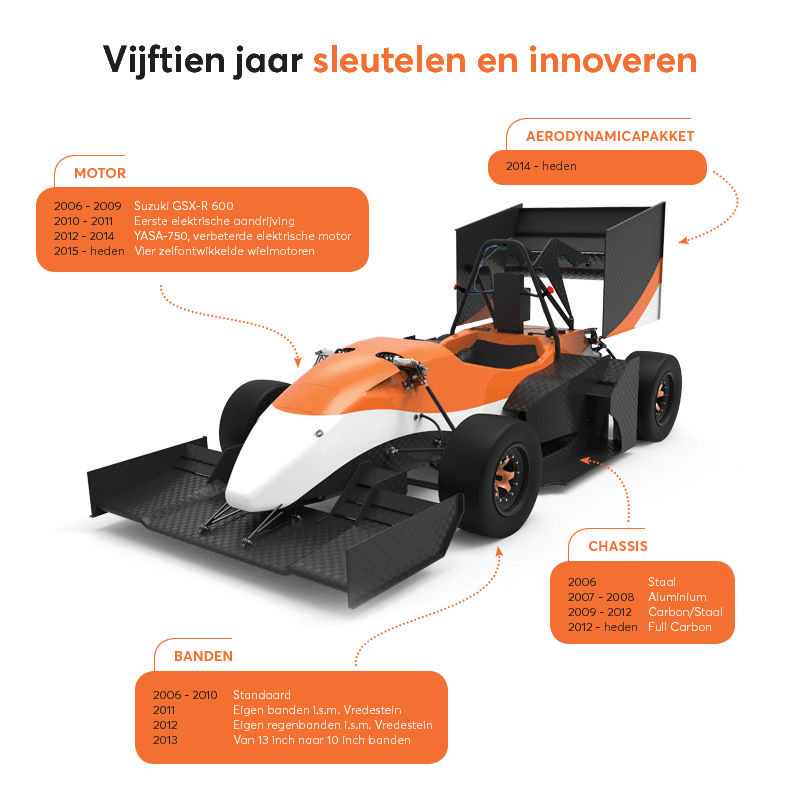