How does the Solar Challenge world champion continue to innovate? As early as 2017, Apex Dynamics supported the engineering students of KU Leuven who won the championship in the following years. Agoria Solar Team developed its own rack and pinion system in 2021 and we were asked to contribute once again. We are of course happy to tell you more about that.

More than 16 years ago, a team of passionate engineering students from KU Leuven wanted to participate in a race with solar cars (a vehicle powered by only sunlight). They built the very first Belgian solar car, the Umicar One, and took part in the World Solar Challenge, a 3,021 kilometer race through the Australian Outback. And they still do, they build solar cars to race around the world, to show the power of green energy and to prove that Belgian technologies and companies are at the forefront of innovation. And the Belgian solar car invariably finishes in the highest echelons.

In 2021, the Solar Team started production of the ninth Belgian solar car. The bar is set high, because with their previous solar car, the BluePoint, the Belgian team has won both the European and the world championship. The student team can count on the support of a number of financial and technical partners, Apex Dynamics is of course one of them.

Rack and pinion system to your own design 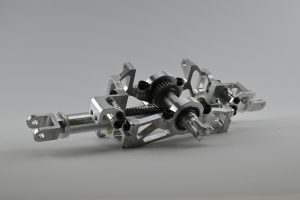 In 2017 Apex Dynamics delivered a gearbox to this team for a unique mechanical four-wheel steering system that worked to their full satisfaction. Now they knocked on our door again because they wanted to change the steering system into their own designed rack and pinion system. The reason for the change is that the regulations of the race are constantly changing to drive the teams to even more innovation.

The designed steering system is much lighter than what the market can offer, has a smaller turning circle than conventional cars and no power steering is required. Due to a carefully chosen pinion, the forces in the steering system are limited and a system has been developed to adjust the combination. 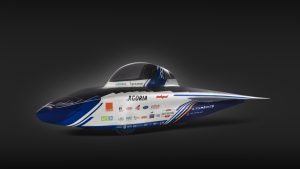 Apex Dynamics assisted with the selection and provided these materials free of charge. These components were internally adapted to the design by means of wire sparks and in the meantime built into the car. The steering box has been developed from a block of aluminum 7075-T6, a very strong aluminum type that also has a low mass density. This has been optimized with the finite element method to save weight. Using shims, the position of the rack and pinion relative to the gear can be controlled in order to make the system free of play.

The presentation to King Philippe of Belgium has been postponed due to Corona, but it will take place at the beginning of August. This was followed by the official presentation of the solar car -with advanced steering system- in Antwerp and it is ready for the next solar race. This is planned for the end of October 2021 in Morocco, called The Moroccan Solar Challenge. This requires 2500 km to be covered in 5 days on only solar energy. See also the website of this event.