How does a gearbox end up in an opera performance?
Dutch National Opera & Ballet opted for the whisper-quiet gearboxes from the ATB- and AE-series from Apex Dynamics for the set of two productions. Both in ‘Porgy and Bess’ and ‘The boy who grew too fast’ decor movements are controlled by our gearboxes. The most important feature is of course a whisper-quiet operation, in the second instance the reliability of the gearboxes.

About the National Opera & Ballet

National Opera & Ballet (1,600 seats, approx. 600 employees) creates, produces and presents both traditional and innovative opera and ballet productions of the highest quality. As one of the largest cultural institutions in the Netherlands, Nationale Opera & Ballet joins together the craft, artistic and technical aspects of the ballet and opera world with its own professional workshops and rehearsal rooms. 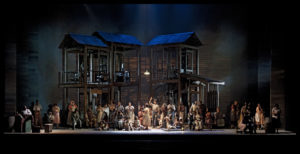 Dutch National Opera & Ballet is the institute for opera and ballet, which operates both nationally and internationally. In the Netherlands, Nationale Opera & Ballet wants to keep the opera and ballet tradition alive and develop further. With this, it wants to reach and enthusiasm a large and diverse audience. Internationally, Dutch Opera and Ballet co-produces and presents its productions in the most prominent houses and theaters. The institute functions in the top five of the world in its fields. The theater is located on the Amstel 3 in Amsterdam. 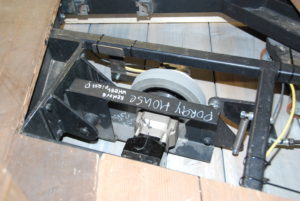 Initially Gershwin’s Porgy and Bess (1935) was controversial because of the ‘negative cliché image’ of poor colored people at the edge of society. In fact, the opera, even though the story takes place among African Americans, is mainly a social drama. In the opera the relationships between the members of a close community in South Carolina (1920) are investigated. Here the residents were busy with survival; each in his or her own way, legally or illegally.

The decor consists of a turntable with a large central house and two smaller houses on the left and right. The central house runs from front to rear (over the turntable) by means of two chains fastened in the floor and an omega construction, driven by motors with Apex Dynamics gearboxes. The two small houses both make a circular movement around a fixed rotation point in the corner. Also for this purpose these gearboxes are used.  In total  four pieces of the AE-series. The opera Porgy and Bess will start on January 16, 2019 in Nationale Opera & Ballet. 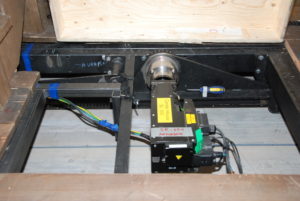 Youth opera: The boy who grew too fast

The youth opera ‘The boy who grew too fast‘ can be seen in National Opera & Ballet from May 2019 onwards. The opera tells the story of the boy Poponel who has grown too fast, so he no longer fits in his classroom. The other children tease him with his much too long body. But there is a solution. A professor has made a machine with which Poponel can become small again under one condition: from now on he must behave exactly like all other children. Will Poponel manage to adapt to the rest? Or can’t he resist being different? Gian Carlo Menotti (1911-2007) wrote this opera in 1982, the first opera he wrote when he was 11 years old. The production is still in the design and drawing phase. 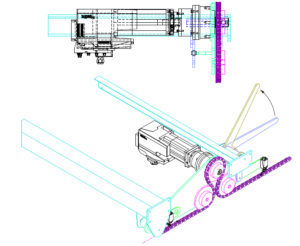 A part of the decor is a so-called shrink machine, which can make people larger and smaller. The ‘machine’ consists of, among other things, a pair of cardanically rotating squares. For its manual drive, Nationale Opera & Ballet has chosen the ATB series spiral bevel gearbox from Apex Dynamics.

Dutch National Opera & Ballet has self-engineered and built both productions, a fine example of problem-solving ability, knowledge and creativity. Apex Dynamics has extensive experience in stage-technology and delivers whisper-quiet, low-vibration and strong gearboxes.

The cooperation between National Opera & Ballet and Apex Dynamics went fast and smooth, and the fast delivery time and outstanding specifications of the gearboxes did the rest.