The electric racing car, the URE14, is almost finished! In addition to an electric car, this is also an autonomous driving car. University Racing Eindhoven (URE) is busy assembling the racing car, which is also the final phase in the construction process. In this article you will read what the biggest challenges were, at what point they are now and what is still planned.

In January we were at URE in their workplace on the campus of Technical University Eindhoven (TU/e). The preparations for their monocoque had just begun. The ideas for the new car were carefully shared: It would be a racing car that can participate in both categories; in the category of electric racing cars and in the competition for self-driving cars. We are now 4.5 months later and the students haven’t been doing nothing. In this article you can read the latest developments.

We already had a glimpse of the monocoque in January – the cockpit, (the bearing) part of the chassis – and it was completed in April. All layers of carbon fiber have been laid, reworked and the end product has been painted. The monocoque is a very important part of the racing car where safety has high priority and the completion is a special moment for every racing car. The completion of this has been celebrated at a so-named ‘Monocoque-tail party’.

Apart from the monocoque, the other parts are now almost ready. Which means the entire suspension is ready and all cables are ready to be installed in the car. Getting all this done at the same time proved to be the biggest challenge of the past period. So many parts are made and at some point they all have to come together. To make certain parts, others must already be finished. To organize that logistics properly and to carry it out according to plan is always exciting. Fortunately, all went well and that means that URE will be working on the actual assembly of the racing car in the coming weeks, all parts are mounted together.

Last year we already saw a beautiful electric racing car, the URE13. This year there will be a completely new racing car, the URE14, which can drive autonomously as well as electrically. The students took this extra challenge and will also participate in autonomous racing competitions this year. 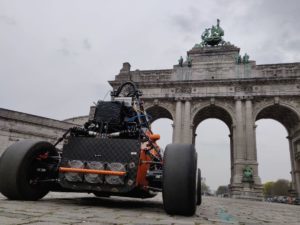 Focus at the coming months

An important achievement for URE is the car presentation on June 12. Then the racing car will be completely finished and they will proudly present it in “Atlas”, the newest addition to the campus of TU Eindhoven.

From the moment of presentation it is important to let the car drive as many test kilometers as possible at different locations and terrains. Based on this, they can implement the latest improvements before the Formula Student Race takes place on the TT Circuit in Assen from 7 to 11 July.

At the end of July, URE will participate in an autonomous racing race in Italy, an extra feature this year. That competition is organized slightly differently when it comes to scoring points and components. The autonomous car drives a little less far and more points can be earned here by having a well-founded design.

URE is certainly looking forward to thise Event and is looking forward to competing with their new racing car. Besides being in a competition, it is also a very pleasant and friendly event to participate in and a good opportunity to learn from other teams!

Apex Dynamics BV wishes team URE good luck and fun at the upcoming events. Of course we will follow all proceedings and keep everybody posted on our special URE pages.