During the Palmetto Regional, the Rembrandts team succeeded in winning the prestigious Chairman’s Award. With this unique achievement, the team has qualified for the FIRST Championship in Detroit.

The team had her mind set on this Award because this was one of the highest achievements for Team Rembrandts. The jury of this Chairman’s Award does not only look at the performance of one construction season or the ranking in the 2018 (Power Up) event. It is assessed on several seasons and there is looked at mutual cooperation (also with other teams), application and progress of technology, but above all it indicates that the goals of FIRST are being pursued.

Description of the Chairman’s Award: 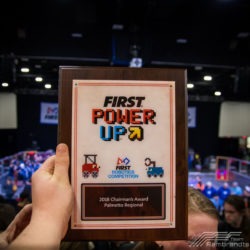 The Chairman’s Award is the most prestigious award at FIRST, it honors the team emulate and best embodies the purpose and goals of FIRST.
To win this award is a great honor. Our students and mentors have spend allot of time and energy in all of our outreach. The Chairman’s Award is presented to the team judged to have the most significant measurable impact of its partnerships among its participants and community over a sustained period, not just a single build season. The winner is able to demonstrate progress towards FIRST’s mission of transforming our culture.

The recipient team will be invited to a FIRST Championship where it will compete for the Chairmen’s Award against winners from other qualifying events. The team exemplifies what great results can come from cooperation between education, business, and society. The group acts as a true role model for other FIRST teams by mentoring 12 FLL teams, 4 FTC teams, organizing events such as FTC regionals, hosting scrimmages and being a resource for FRC teams around the world. 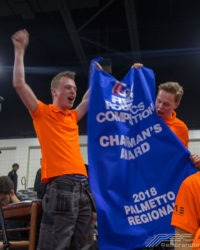 By training all students on the team to receive SolidWorks certifications and believing that the best way to inspire youth is through other youth, they have their Compass pointed in the right direction. Following in the footsteps of their namesake to usher in the new Golden Age of technology and science, this team is roaring to make FIRST known throughout their continent.

On the way to Orlando!

Of course Team Rembrandts celebrates this fantastic victory, but not too extensive. The team flies directly to Orlando next Regional. This prize is in the pocket, now they are going to try to get a nice ranking in the game. Success Team Rembrandts, we will continue to follow you.